Home - Technologies - What is a smart city? Technology and examples

What is a smart city? Technology and examples

Approaching construction from an efficient and smart perspective is the raison-d’ être of smart cities. There are so many different aspects which have an impact on smart cities: energy, transportation, waste management, mobility, not to mention the efficient construction of smart buildings and infrastructures integrated in the city.

But as McKinsey stated in a previous publication, smart-city strategies begin with people, not technology. “Smartness is not just about installing digital interfaces in traditional infrastructure or streamlining city operations. It is also about using technology and data purposefully to make better decisions and deliver a better quality of life” addresses the company.

Let´s take a deep dive into the technology that´s allowing people to think of the cities of the future in a much more realistic way than that portrayed by The Jetsons back in the 60s.

What is a Smart City?

A smart city is defined as a city in which information and communication technologies are used to improve the citizens’ quality of life, to boost the efficient use of resources, and to improve sustainability. It goes without saying that a city is considered sustainable when its buildings are sustainable; but what exactly do we mean when we talk about these types of buildings?

A smart building is a structure equipped with innovative materials and technologies that allows for all its systems to be automated and self-regulated. By making use of technologies like IoT (Internet of Things), a smart building seeks to improve the usability of the structure, optimize its efficiency, and enhance its safety and accessibility, all while making it more sustainable and environmentally conscious.

Let´s take a look at the energy consumption of a building, for example. Did you know that 45% of the energy required to commission a building is linked to its temperature control system? Although this is its largest energy expenditure, the good news is that by implementing different energy efficiency techniques, consumption can be reduced by up to 90%.

A building’s energy consumption can be fully optimized in many different ways like insulating the building envelope to help to reduce energy consumption, eliminating thermal bridges, installing double or triple glazing, and countless other measures which are beneficial to the environment.

Smart cities put data and digital technology to work to make better decisions and improve the quality of life. More comprehensive, real-time data gives agencies the ability to watch events as they unfold, understand how demand patterns are changing, and respond with faster and lower-cost solutions.

Yet, by putting together many smart buildings together, we cannot call a city smart on itself. A smart city has three layers of work in which innovation and new business models play an important role: its technology base, powered by massive communication networks; specific applications, the ones that translate raw data into insights and action items using technology; and lastly, its usage amongst the city, public and companies. If the three find a well-balanced implementation and a massive adoption amongst the city´s component, a Smart City is on the rise. The powerhouse Deloitte even goes on to call the public´s involvement in smart cities a 2.0 version of these. “Ultimately, the smart cities of tomorrow will involve not just government, but citizens, visitors, and business in an intelligent, connected ecosystem built on a sensor-based physical infrastructure” they expressed.

The importance of Smart Cities

Essentially, Smart Cities have the potential to enhance the urban quality of life. Given the massive migration and rapid urbanization of the cities that´s happening on a weekly basis all over the world, it´s imperative that everyone acts in order to eliminate past mistakes that can have a negative effect in the life of its cohabitants and the environment.

This phenomenon presents itself as a challenge for cities, as they are obliged to provide environmental sustainability and ensure the physical security and safety of its inhabitants, as well as fight against the misuse of resources, the threat of increasing crime rates, poverty, and civil unrest. To avoid these challenges as much as possible, most thriving cities seek sustainable, but also resilient, growth. Smart city technology plays a big role as part of the solution.

Benefits of living in these cities

Besides the benefits that tackle urbanization in the metropolises, smart cities also present a tremendous benefit to the implementation of sustainable energy sources, another pressing challenge for the construction industry. Emphasis has been placed on the following three energy sources:

Another feature that these types of cities offer is the efficient management of resources, including information. When we talk about the connection between the construction sector and smart cities, it is important that we do not overlook the role played by Building Information Modeling (BIM). By using the BIM methodology, we can anticipate the energetic behavior of a particular building, therefore making it possible to make more informed environmental decisions.

More so, smart city technologies can improve the cost of living, safety, commute time, jobs, connectedness, environment, and health of the people that live in them up to 30 percent.

Information is power, and buildings can generate high-value information. No wonder the rise of new smart technologies and infrastructure has seen an increase in the global smart city industry, going from a valuation of $410.8 billion USD in 2020 to an expected $820.7 billion USD by 2025.

This exponential growth is guided by global developments in smart technologies. Here are some to watch for in smart cities:

The Internet of Things (IoT) is at the heart of smart cities! According to Oracle, IoT describes the network of physical objects that are embedded with sensors, software, and other technologies for the purpose of connecting and exchanging data with other devices and systems over the internet.

The king of transparency and efficiency! Blockchain is a decentralized database that serves as a public record and stores information regarding assets and transactions between two or more parties. The most significant benefit of the blockchain in construction industry is in trust and ease of access to important documents such as invoices.

The increasing complexity of modern construction projects means that projects can quickly become difficult to coordinate, and potentially lead to mistrust and disputes if those involved disagree about project facts. Better documentation and new systems that promote transparency of data can provide major benefits for the industry, making blockchain an essential for the successful development of Smart Cities.

Cloud technologies offer businesses the capacity to store, share and utilize data from anywhere as long as they have an electronic device (such as a laptop, smartphone, or tablet). For construction companies, a clear benefit of cloud computing is cost saving, as it reduces capital expenditure, the enhancement of the company’s organizational processes. These helps expand to new markets, accelerate the decision-making process, and improves communication within the stakeholders and the customers.

Examples of Smart Cities in the world

The American Society of Mechanical Engineers (ASME) identified these eight factors as the most crucial ones to catalogue a smart city: mobility, healthcare, security, water, energy, engagement and community, economic development and housing, and waste. Some of the cities they highlight as being and example for Smart Cities are:

The house of the Burj Khalifa, the tallest building in the world, is en-route to digitalize all government services, including nearly 100 initiatives encompassing transport, communications, infrastructure, electricity, economic services, and urban planning. The local government aims to be 100% paperless by the end 2021 and is leveraging on emerging technologies such as Blockchain and Artificial Intelligence to recreate everyday experiences for residents and visitors of Dubai, making them more personalized, seamless, efficient, and impactful.

The home of the Boston Celtics was one of the first to experiment with smart initiatives in USA. They opened their Innovation District at its seaport in an effort to be a public catalyst for innovation. Its masterplan centers on citizen participation, or “participatory urbanism,” using a collection of apps for citizens to engage within one another and report on hazards, traffic, and opportunities. Smart Streets is their most recent bet to enhance their community´s safety and understand how people navigate and interact within the city.

The British city has a program to provide 5G connectivity to the entire city, requiring new developments to provide full fiber-optic coverage. Likewise, London’s iconic lampposts also are being fitted with a collection of sensors and charging points for electric vehicles.

London government has been promotion the Smart London program since 2018 in order to make it “the smartest city in the world”.

The vibrant Spanish city is consistently being praised for embracing smart technology, which is credited with invigorating an economy that deteriorated in the 1980s. In 2011, the city hosted the first Smart City Expo and World Congress to promote a self-sufficient city of productive neighborhoods at human speed, inside a hyper-connected zero emissions metropolitan area.

Barcelona is now saturated with LED light pole mounted sensors that monitor traffic, air quality, pedestrian activity, and noise, and which can dim or switch off lights as needed. Smart bins fitted with vacuums suck waste into underground storage, reducing foul odors and decreasing the number of trips from collection trucks.

What is CEMEX Ventures doing to bring smart cities into the present?

As the eagle eyes of CEMEX on the outside, at CEMEX Ventures we are constantly on the lookout for new technologies that can help make smart cities a reality in more places. As they help boost innovation in many areas of the construction process, by betting on smart technologies we guarantee that multiple challenges are addressed with the solutions we empower, whether its by creating our own, investing in startups or collaborating with them to empower their solution.

For example, investments in startups like Modulous help address the housing crisis need in the big cities, as well as implement a new way of constructing that reduces the environmental impact and eases the design, construction, and implementation design of a structure through the use of a highly engineered modular construction software.

Everything we do at CEMEX Ventures is of benefit to the emergence and development of the cities of the future and we´ll continue tackling the most pressing challenges that emerge in the industry to guarantee that smart cities can become a reality in more places.

Drones along the construction lifecycle

The investment in drones is growing exponentially and its use in the military sector has reached multiple fields such as mining, industrial or agricultural, also reaching construction. The investment of drones in construction is relevant in all phases of its lifecycle, driving it to the day to day of technological innovation and reducing risks, time 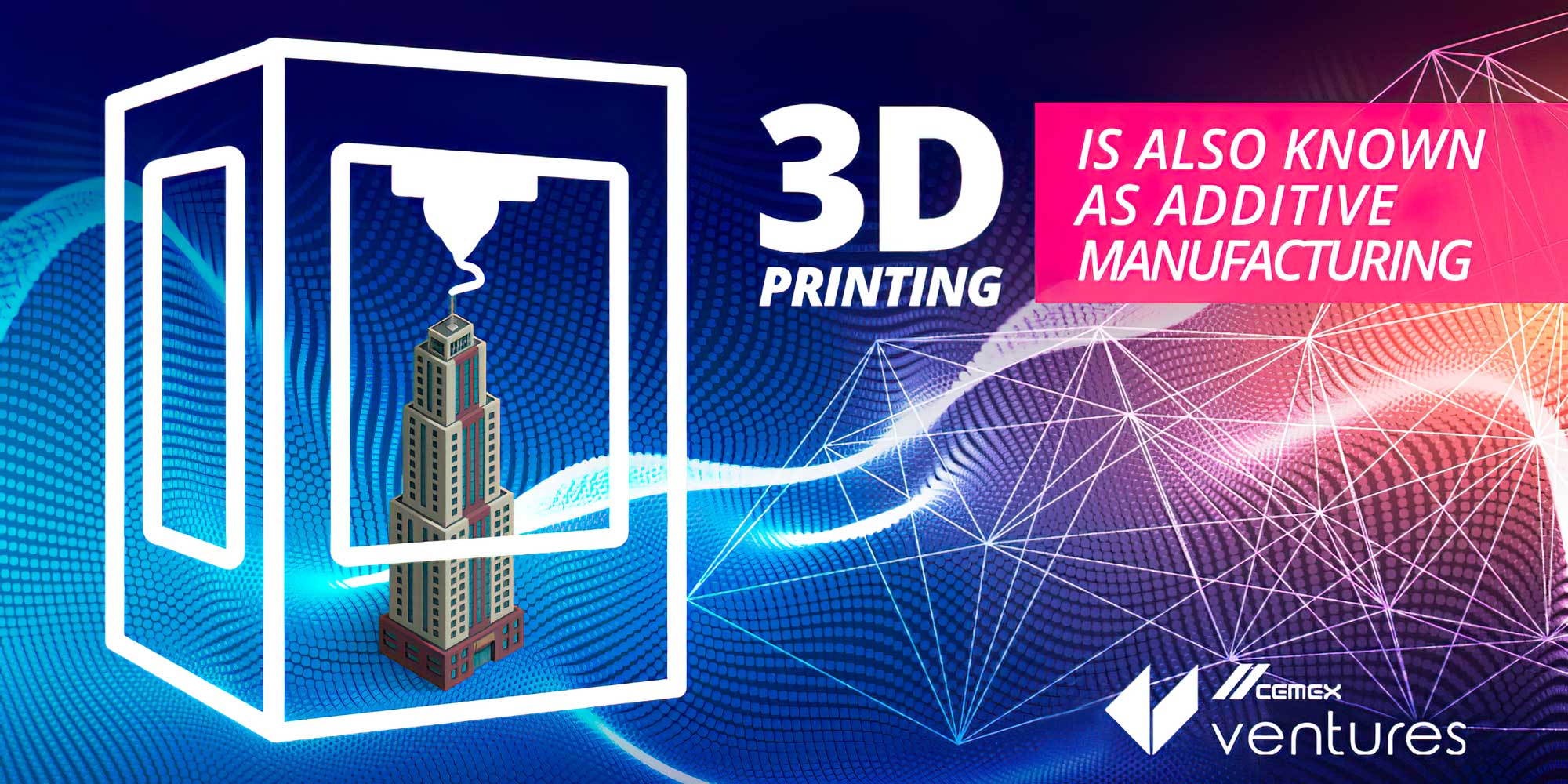 Benefits of 3D printing in construction

Building On-site, reducing operation and logistic costs, and even modifying designs at the moment are some of the benefits of 3D Printing in construction.